Our company started calling on West Coast engineering firms as early as 1960. We opened our L.A. sales and applications office in 1965 when it became important to provide local service to the most seismically active parts of the country in California, Oregon, Washington and Alaska as well as Vancouver, Canada. Very few competitors, and especially Eastern based firms, have had this exposure. While we offered a broad line of restraints, all of these systems were in their very early stages. In 1971 there was a major earthquake in San Fernando, California that read 6.0 on the Richter scale with horizontal ground accelerations recorded at 0.2 g. In 12 seconds there was tremendous damage to mechanical installations with virtually every type of support failure and the engineering community became concerned.

While we did not consider ourselves expert, in 1971 the San Francisco Chapter of ASHRAE thought enough of what we had been doing to invite Mason as the principal speaker at one of their meetings. In the three month preparation for this presentation, we intensified our studies and developed the concept of deceleration at acceptable levels and the importance of Neoprene cushioning rather than hard stops. Our philosophy was well received, and with the help of CAL-TEC in Pasadena, California, we developed a dynamic analysis program based on a response spectra as the proper approach to the problem. (See Bulletin SCS-100.)

While a few installations followed this method, we found the program far more useful in bomb blast installations in various parts of the world. Specific response spectra are not readily available for all areas, and the response spectra on a particular floor rather than at ground level, almost nonexistent. What the program did, however, was give us a better understanding of the phenomena and the need to provide materials with cushioned restraining capabilities far in excess of ground recorded or predicted acceleration levels. 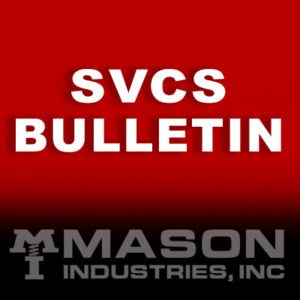